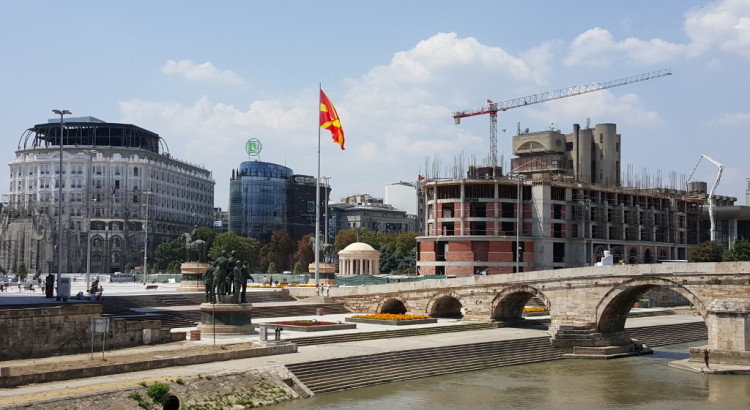 The proper words elude me as I attempt to adequately describe the capital of Macedonia (or the Former Yugoslav Republic of Macedonia, for you Greeks out there).  ‘Strange’ is perhaps a gross understatement but then are so many other words I could prattle off:  beautiful, odd, magnificent, and misplaced.  However, I can definitively say that the people of Skopje are wonderful and friendly which is no exception for the Balkans.  Like the Bulgarians, Macedonians are gracious enough to entertain my mediocre Serbian and they maintain an active curiosity while doing so.

My first sight in Skopje was that of the bus station which was quite literally overshadowed by the train station considering there seems to be a six rail interchange about thirty feet above the main terminal supported only by massive concrete pillars.  I arrived at the hostel early in the afternoon and was delighted to discover I was not staying in another attic.  Instead, each of the bedrooms were delightfully decorated with Smurfs, Mickey Mouse, or with simple line characters.  Although it was dreadfully hot, the rooms were quite comfortable and the hosts were interesting to say the least.  Though my favorite part of this particular hostel, Hostel Backpackers, was the pair of filthy, malnourished, adorable kittens which resided on the property.  Watching them hungrily pounce on anything the other tenants happened to set on any surface was quite entertaining.

I began to explore the city the following day, fortunately the city is relatively compact as most of the main attractions were located upon the Vardar River near the center of the city.  Bordering upon excessive the exuberance of the city leaves one a little more than befuddled.  Within five

Aside from the statues, the extravagance of the public buildings and the main square begs a frugal person like me to wonder where they are getting the money to spend on such showmanship.  A German man I met in Ohrid a few days later compared the Skopje city center to that of Las Vegas with all of its excess situated in the middle of a desert.  I feel that this is a fair description considering once one leaves the center of the city one is greeted by what one would expect in the Balkans:  humble people and socialist era brutalist architecture.  Having said this, I think given the drive and ambition of the Macedonian government Skopje will soon be the home to one of the most impressive city centers in Europe.

In the distance, in the mountains, over the shoulder of the grandiose, yet not so ambiguously named “Warrior on a Horse” is located the irrational, out of place Millennium Cross dedicated to two thousand years of Christianity in the Balkans.  Brightly illuminated throughout the night, the sixty-six meter cross sits at the peak of the 1066 meter Mount Vodno and is clearly visible from most anywhere in the city.  Immediately upon seeing it, I had yet another stupid idea:  I will climb the mountain!

The next morning I awoke and it was quite hot as had become the norm.  Yet still I was undeterred.  After a small lunch I began to head towards the mountain on foot.  I won’t lie, I was mostly guessing where I should be heading to best approach the base of the mountain, but luckily my orienteering merit badge from Boy Scouts came in hand and I eventually came to the main trail at the foot of the mountain.  The first leg was 2.1 km at a 12% grade,

where upon it opened up to a picnic area complete with a lift to the top.  Being the stalwart adventurer that I am, I risked my physical comfort to attempt the so called 2.3 km “Olympic Path” at a 22% grade.  I’ll admit, the number of times I felt like dying was equal only to the number of steps I took through the hot humid forest.  Eventually, I did arrive safely at the peak and the gargantuan cross, the crisp mountain breeze, and the splendid view of the city and country side were my rewards.  I took the lift back down.

One thought to “Skopje – New Alexandria”