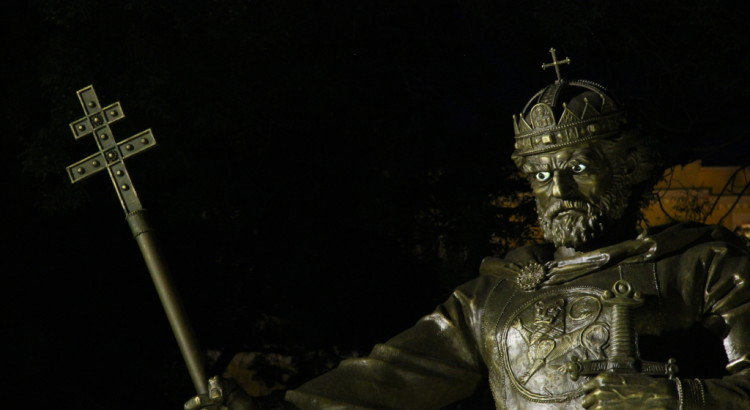 After a particularly brutal pair of goodbyes taking place entirely too early on a Sunday morning at the Belgrade train and bus stations, I spent a particularly brutal six hours on a bus to the Bulgarian capital of Sofia.  The ride itself was comfortable enough without any major complications other than I simply wasn’t entirely interested in going there.  I don’t hold any glaring grudges against Sofia, it was simply impossible to go where I had really wanted.

I arrived in Sofia around 6 PM and spent a few minutes acquainting myself with the screenshot I had saved on my phone which showed the location of my hostel, Nightingale, in relation to the central bus station before eventually making my way through Sofia’s back streets to arrive at my destination.  I made my way up the winding staircase to the hostel.  My ears were immediately greeted by the sound of loud metal music which was blasting from the hostel attendant’s desk.  I never caught the attendant’s name but every encounter with him left me somewhat bewildered as everything about him appeared to be hippy, but every action he took screamed metal.

My room was located directly under the roof and was shared with at least fifteen other beds.  I locked my belongings in my personal storage locker and spent the remainder of the evening relaxing in one of the common rooms, charging my phone, and talking over the internet to the friends I had just left behind.  The most interesting feature of the hostel, besides the attendant, was the fact that visitors often left behind phrases written on paper and taped to the hostel walls.  The one that drew my attention most turned out later to be from Stephen Hawkings, “Quiet people have the loudest minds.”

I woke up early the next morning with a strange idea to do something stupid.  It was 95 degrees in Sofia and I wanted to go running.  So I did.  I found a very large park nearby which was connected to an even larger forest, each with trails perfect for running.  The forest was idyllic and devoid of any of the trash and graffiti I’ve come to expect from the Balkans.  I did not worry too much about it’s absence as I knew it would be waiting for me when I finished my run about an hour later.

After my run I treated myself to McDonald’s for the first time since my journey began which was located in an underground pedestrian bypass.  I then returned to the hostel and immediately fell back asleep.  Fortunately, when I awoke for the second time that day I had no such crazy notions as I had entertained the first time.  Instead, I simply put my shoes on and left to explore the city.  I immediately noticed that Sofia doesn’t feel at all like Belgrade.  The streets are too straight and make entirely too much sense.  The buildings seem more modern with their massive neon signs on their roofs advertising somewhat obtrusively and unaesthetically for a smorgasbord of American corporations.  Sure, Belgrade had a few of these signs, but they at least advertised a few of their own companies.

Sofia boasts some beautiful architecture and more than a few lovely monuments.  The most impressive of these is that dedicated to The Liberator Tsar.  There is also an eery looking statue of Tsar Samuel not too far removed from the crown jewel of Sofia, the St. Alexander Nevsky Cathedral dedicated to the fallen Bulgarians, Romanians, Belarussians, Ukrainians, and Russian soldiers who died liberating Bulgaria from the Ottoman Empire.  With the capacity to hold ten thousand people, this cathedral was constructed in the late 1800’s and is the second largest on the Balkan Peninsula after the yet incomplete Temple of St. Sava in Belgrade.

Aside from the architecture there are also several pedestrian shopping districts which were home to my favorite part of the city, the people.  Despite the amazing sights, my favorite experience in Sofia was interacting with the locals only in Serbian without them trying to speak back to me in English.  Likely they didn’t understand me very well and for the life of me I had no idea what they were saying, but it was nonetheless pleasant and painless.

My second day in Sofia was dedicated simply to a quick photo tour followed by catching up with these writings in a quiet cafe in which, much to the relief of the shopkeeper, I feel like I quelled what might have been a particularly violent student uprising.