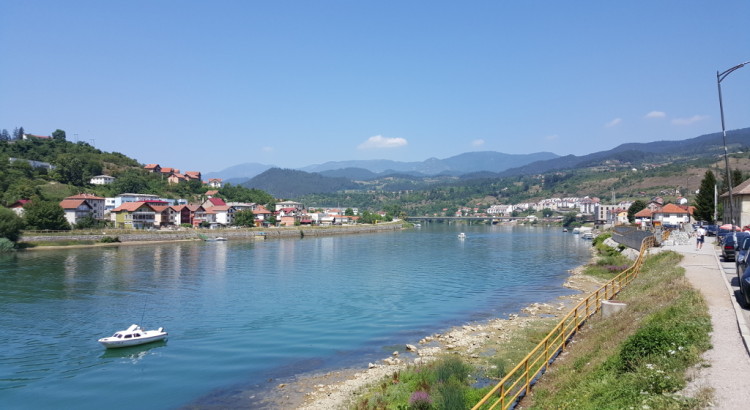 We awoke early the next morning with the intention of quickly grabbing breakfast and immediately heading to the Bosnian border towards Višegrad.  Instead we mozied on account of our hostess generously preparing fresh coffee and treating us all to a short conversation.  Although we successfully found breakfast, we lost ourselves to the irresistible allure of the large open market filled with vendors peddling various traditional handicrafts.  In fact our hostess had spent our entire conversation knitting a pair of woolen socks for this very purpose.

Soon enough we came to our senses and remembered we didn’t actually want to buy anything.  So we left the market and after checking out a nearby Orthodox church we started on our way to Višegrad.  At this point I should note that the temperature had been approaching 100 degrees.  This became exceeding relevant around the time we discovered we had a one hour wait in a hot car at the border checkpoint.  We held out in our sweat drenched clothing for as long as possible before eventually noticing that everyone in front of us might have had the right idea.  So we followed their example and got out of the car to wait in the direct sunlight where, because we were bounded on all sides by mountains, we were exposed to the slightest of breezes.

Slowly we made it to the border checkpoint where it was possible to hear the surprise in the border guards voice as he listed the nationalities represented in the car, “Amerika.  Mađarska.  Slovačka.  Austrija.  JAPAN!”  Aside from a pair of incredulous glances they let us pass without any problems.  We were now in Republika Srpska.  Republika Srpska is the Serb dominated political entity which shares administrative control over Bosnia and Herzegovina along with the Bosniak and Croat entity called the Federation of Bosnia and Herzegovina.  If this sounds confusing to you, don’t worry.  Even if you happen to have a degree on the subject the natives will still think it is too complicated for you to possibly understand (looking at you Uroš).  The reason I bring this up is because prominently placed immediately upon entrance into Republika Srpska (predominantly Serbian Orthodox Christian) is a moderately sized mosque.  I’m still uncertain if it is actually used or simply exists to spite Serbs for their role in the Bosnian civil war.

We soon arrived in Višegrad, home to the famous Mehmed Paša Sokolović Bridge as was written about by Nobel Laureate Ivo Andrić in his novel “Na Drini Čuprija.”  The bridge was constructed by the Ottoman Grand Vizier Mehmed Pasha Sokolović in the 16th century.  Sokolović was born in a nearby village to Serbian Orthodox parents before he was taken from them as part of the Ottoman practice of devşirme to become a Muslim Janissary.  Years later, having reached the most important position in the in the empire (a position unavailable to natural born Muslims), he remembered his place of birth and commissioned the construction of the bridge.

We parked in a pay-to-park lot but fortunately before we scrounged up enough convertible marks to pay, a nearby gentleman kindly informed us that indeed “Only idiots pay.”  Not one to argue with custom we left the car in the lot and proceeded to what is known as Andrićgrad or Kamengrad.  Kamengrad was built by Serbian filmmaker Emir Kosturica in preparation for the film adaptation of Ivo Andrić’s famous novel.  Constructed entirely out of white stone for the film, the location is quite beautiful and is now host to a vibrant small business sector as well as a small university.  We treated ourselves to ice cream and lunch before we made our way to the bridge.  Unfortunately, we were not allowed to actually go onto the bridge on account of ongoing repairs which was a huge disappointment.

On our way back to the schoolhouse we decided to visit Drvengrad, another city built by Kusturica for his film “Life is a Miracle.”  This small wooden village is situated in the mountains and is modeled after traditional Serbian villages as would have existed in the early middle ages.  We seemed to have arrived too late in the day to see any of the festivities (if indeed there ever were any).  The city was interesting in the ingenuity of its construction, however aside from the scenery there was not much of interest at the small attraction.

Having seen both of Kusturica’s cities our thirst for adventure had been sated and we began our journey back to the school on the same nauseating road which had brought us.

One thought to “The Cities of Kusturica”